This Week on the B-Side: VicVotes

This Week on the B-Side: VicVotes

This might be a commonly heard message around voting time, but the Vic Votes team refuses to accept it, and have set out to take action to inspire change this election.

Listen to Dan Gunn discuss VicVotes and more on this week's B-Side on theZone @ 91.3

Vic Votes is a non-partisan voter advocacy group aimed squarely at youth.  Their mission for this federal election is to bring new voters to the polls, by focusing on facilitating in-person interactions between youth and the candidates.  Vic Votes holds events and draws attention to opportunties for young constituents to be introduced to those running for election, and to engage into dialogue that will hopefully ignite their passion for participating in the democratic process.

Many other groups are doing fantastic work online and through social media to increase voter turnout.  Vic Votes has taken the lead on pursuing real-life activations, and is hoping to do their part to inspire a group notorious for not showing up to the polls to become engaged in this election.

How did it begin?

Vic Votes is powered by it’s two founders - Kevin Ehman and Joel Hibbard, and their awesome team of volunteers.  Everyone involved with Vic Votes shares a passion for participatory democracy and being informed and engaged in the political process.  Kevin and Joel both grew up in families who talked politics around the dinner table and have always stayed engaged in all levels of government, but both felt a growing dissatisfaction with their generation’s lack of participation in politics.  Inspiration struck the duo last fall during the civic elections in the CRD.  Kevin recalls, 'We banded together to encourage our peers in the downtown retail/hospitality/creative/tech sectors to get out and make sure their voices were heard! And, to our somewhat surprise, it caught on and seemed to really connect. We held a candidates event at Sitka and the turnout and excitement by both those seeking office and youth was beyond our expectations.”

The momentum behind Vic Votes has continued this year, with the big highlights being a chance to speak on the main stage during Rifflandia, and the candidates forum they held in early September at the Victoria Events Centre which saw an unprecedented turnout!

The Vic Votes message to potential voters is simple: “This is your chance to make your voice heard, and there's absolutely a reason for you to vote. What's important to you? Housing, education, healthcare, the environment? Find the candidate who most closely represents your views and cast your ballot accordingly.”

Vic Votes is placing their full focus on getting young voters to the polls on October 19th.  Following the election they will regroup, debrief and evaluate what can be done next.  Kevin says one of the most important aims is to “ensure [Vic Votes] leaves a legacy of tools and ideas for others across the country to use as a template if they want to undertake this kind of project in their own city or town.”

To find more information on Vic Votes and to see what they’re up to, head to the polls on October 19th!  … if you’d like to learn a little more before then, you can visit/follow them through their Website, Facebook and Instagram.

You can also email any and all questions directly to Kevin and Joel - kevin@vicvotes.ca and joel@vicvotes.ca 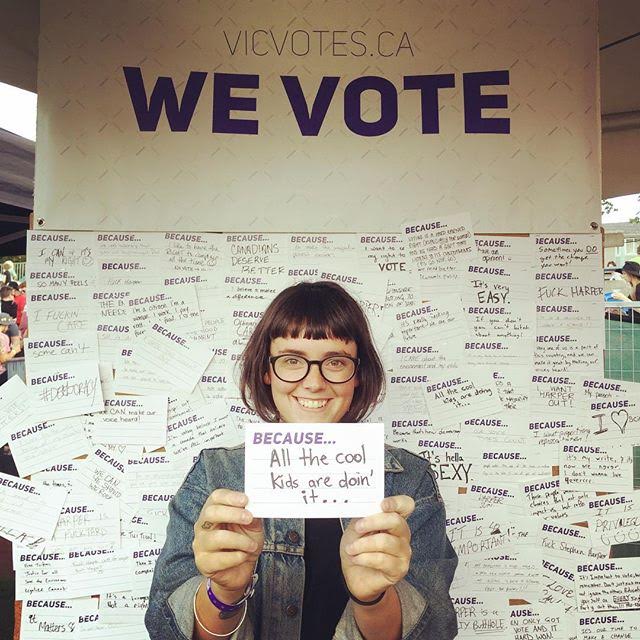