“At this point, it is tough to tell all the factors that are driving this, but it seems obvious that pent-up demand following the lockdown measures of a pandemic along with adaptive business tactics to more fully leverage online tools are creating incredible new opportunities,” said Dan Gunn.

With over $1 billion invested into British Columbia’s tech startups in the first quarter of this year, venture funding in the province nearly matched that of Canada’s largest tech city, according to Hockeystick’s latest ecosystem report.

Startups in BC raised a collective $1.02 billion in the first quarter of this year, representing a staggering 914 percent increase from last quarter and a 238 percent increase from Q1 2020. With 41 deals closed, BC was also very active compared to previous quarters. The volume of investments in Q1 2021 represents a 105 percent quarter-over-quarter increase and a 64 percent year-over-year increase.

Q1 2021 was a landmark quarter for venture funding in BC. Not only was the total investment raised just shy of matching the $1.1 billion raised in the region across all of 2020, but the province’s tech startups also raised the highest amount of funding in a single quarter over the last two years.

“In Canada, the data is showing that this is a three-horse race for the lead with Toronto only leading by a nose in total investment over BC and Montréal,” said Rob Darling, research partner at Hockeystick.

Darling noted that while BC was close to Toronto in terms of total investment, the western province only saw half of the number of deals (Hockeystick tracked 81 deals in Toronto across Q1 2021). 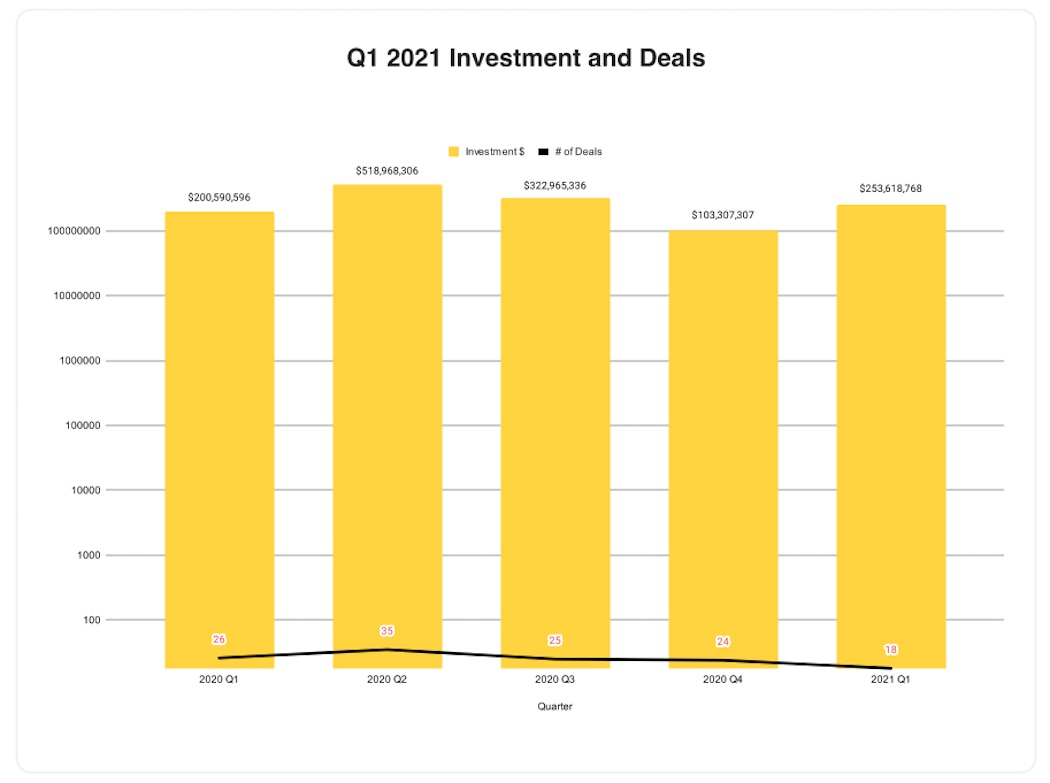 Among the largest Q1 deals tracked in BC were Dapper Labs’ $385 million strategic investment, Fraction’s $289 million debt and equity raise, and Svante’s $124.6 million Series D round of funding.

Hockeystick described the top two deals as “double majors,” meaning the companies that raised funding span more than one vertical. Dapper Labs, for example, is considered a gaming company. However, its entertainment platforms, such as NBA Top Shot, are based on blockchain technology. Fraction, which aims to help homeowners manage and diversify their home equity, operates at the intersection of both FinTech and PropTech.

Deals tracked across BC in Q1 were also spread across many verticals, including healthtech, EdTech, FinTech, TravelTech, retail, artificial intelligence, AutoTech, and SaaS. Healthtech companies saw the most investments, accounting for 17 percent of the deal volume in Q1 2021.

“While there are many verticals driving growth in BC, healthtech is the one to continue to watch as it drives the largest number of deals, and these companies tend to be earlier stage companies right now,” Darling said.

FinTech, which accounted for 12 percent of the deals, had the second-largest share of deal volume. FinTech startups not only saw significant venture funding, but the sector also saw one major acquisition during the quarter. Beanworks, a Vancouver-based FinTech startup that offers accounts payable software, was acquired by French enterprise firm Quadient for $104 million in March.

Though the city of Vancouver drew the most tech funding in BC, the province is also home to other tech ecosystems that contributed to the growth in venture funding in Q1 2021.

“At this point, it is tough to tell all the factors that are driving this, but it seems obvious that pent-up demand following the lockdown measures of a pandemic along with adaptive business tactics to more fully leverage online tools are creating incredible new opportunities,” said Gunn.

“It’s probable that Victoria, and other tech regions, are going to enjoy a very strong second half to 2021,” Gunn added.

In 2020, BC exhibited signs of a gap in funding for the province’s early-stage startups. Early-stage deals accounted for 31 percent of all deals last year, and only two deals closed in the $0 to $250,000 range.

Hockeystick’s report indicates that in Q1 2021, the distribution of rounds was much healthier than in previous quarters. Overall, 22 of the 41 deals closed were classified in the pre-seed and seed stages, comprising 54 percent of all deal volume in the province. 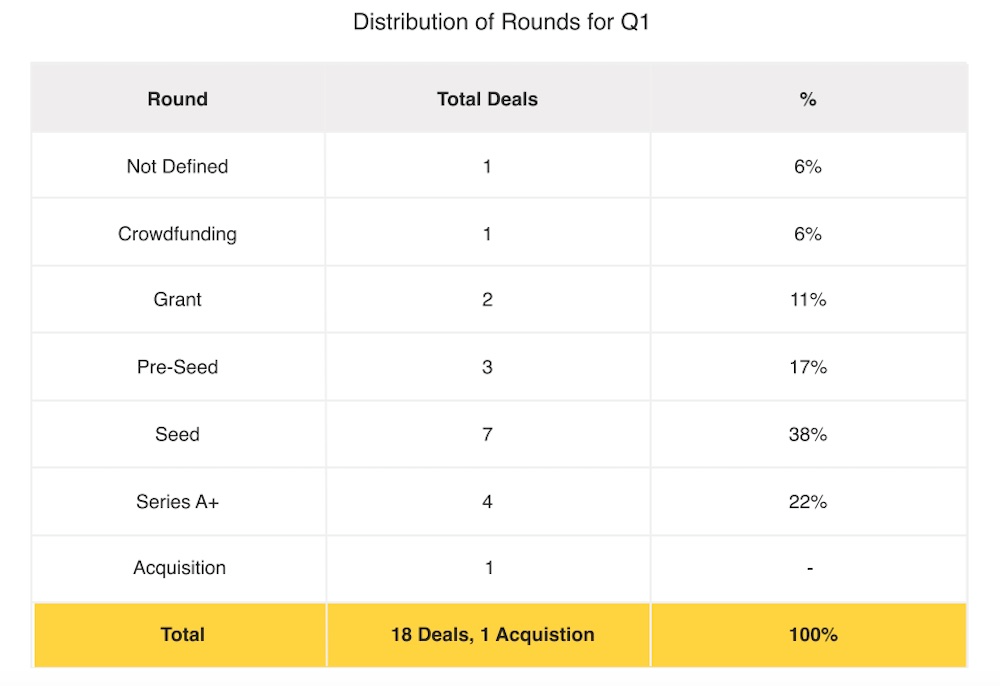 Overall, 22 of the 41 deals closed were classified in the pre-seed and seed stages, comprising 54 percent of all deal volume in the province. (Source: Hockeystick)

The increase in early-stage deals could point to the funding gap at this stage beginning to close due to the increased participation of early-stage investors. For example, one of the top investors in the province across Q1 2021 was Panache Ventures, which invests in pre-seed and seed rounds. Another top investor was Boldstart Ventures, a New York-based venture firm that bills itself as a “day one” partner for enterprise SaaS startups.

Late-stage funding was also healthy in BC, with 17 investments classified in the Series A and above stages, or approximately 40 percent of all deal volume.

Several initiatives have been launched in recent months that could give startups a further boost and drive more investments in 2021. In the spring, crown corporation InBC announced plans to launch a $500 million strategic investment fund for local startups. Though not specifically geared towards the tech sector, BC’s minister of jobs, economic recovery, and innovation recently told BetaKit he expects “a lot” of the fund’s capital will go to tech companies.

The federal government is also developing a new regional development agency specifically to support projects and companies in BC, with over $500 million in funding committed over the next five years.

Though it’s not clear whether BC will manage to keep the momentum seen in Q1 for the rest of the year, the region is demonstrating that the province can rival Canada’s most prominent tech ecosystem.

The full Hockeystick BC Tech Report can be found here.