Julie Angus fell in love with the water when she moved to Victoria for graduate school. Since then, she has voyaged across oceans and the world of entrepreneurship, and now helms a company that makes it easier to learn more about the ocean.

In 2018, Angus and her husband Colin created Open Ocean Robotics: a company that builds and deploys unmanned, solar-powered boats that collect information from the ocean that can be used by governments and organizations to protect marine life and advance their defence interests.

“I’ve always been aware that the ocean places a key role in our economy, the environment, and people’s livelihoods,” Angus said. “I would say I started to become more aware of the challenges in protecting the oceans through my expeditions, which have tended to be small boats out on the open ocean, or in coastal ways as well and rowing across the Atlantic.”

Angus became the first woman in the world to row across the Atlantic ocean, after she and her partner traversed 10,000 kilometres between Portugal and Costa Rica over five months in 2005. Her résumé extends well beyond seafaring expeditions: Angus has written books and produced movies, sits on the advisory board for NATO’s Maritime Unmanned Systems initiative, and won countless awards for business, science, and writing accomplishments.

Next month, she will be speaking at Capital Daily Festival about how Victoria is primed to become a “blue economy” hub, and how this could impact the region.

“We’re really well positioned here in Victoria in that we have a lot of ocean resources, we’re surrounded by water,” Angus said. “We also have great government organizations whose focus is to either better understand or protect the waterways, whether you're thinking of the Department of Fisheries, or Institute of Ocean Sciences in Sidney, or the Navy.”

Open Ocean Robotics already has contracts with the Navy and federal government. The data collected by its vessels, called “uncrewed surface vehicles” or USVs, are used for monitoring marine mammals as well as protecting defence interests.

For example, the USVs track where Southern Resident Killer Whales are located and share that information with the Department of Fisheries and Oceans. This information is then used to make decisions, like where and when to slow marine vessel traffic to better protect the whales’ habitat, Angus said.

The company was hired by the Canadian Navy to monitor “their naval ranges where they do maritime exercises,” and make sure they’re safely away from marine mammals. 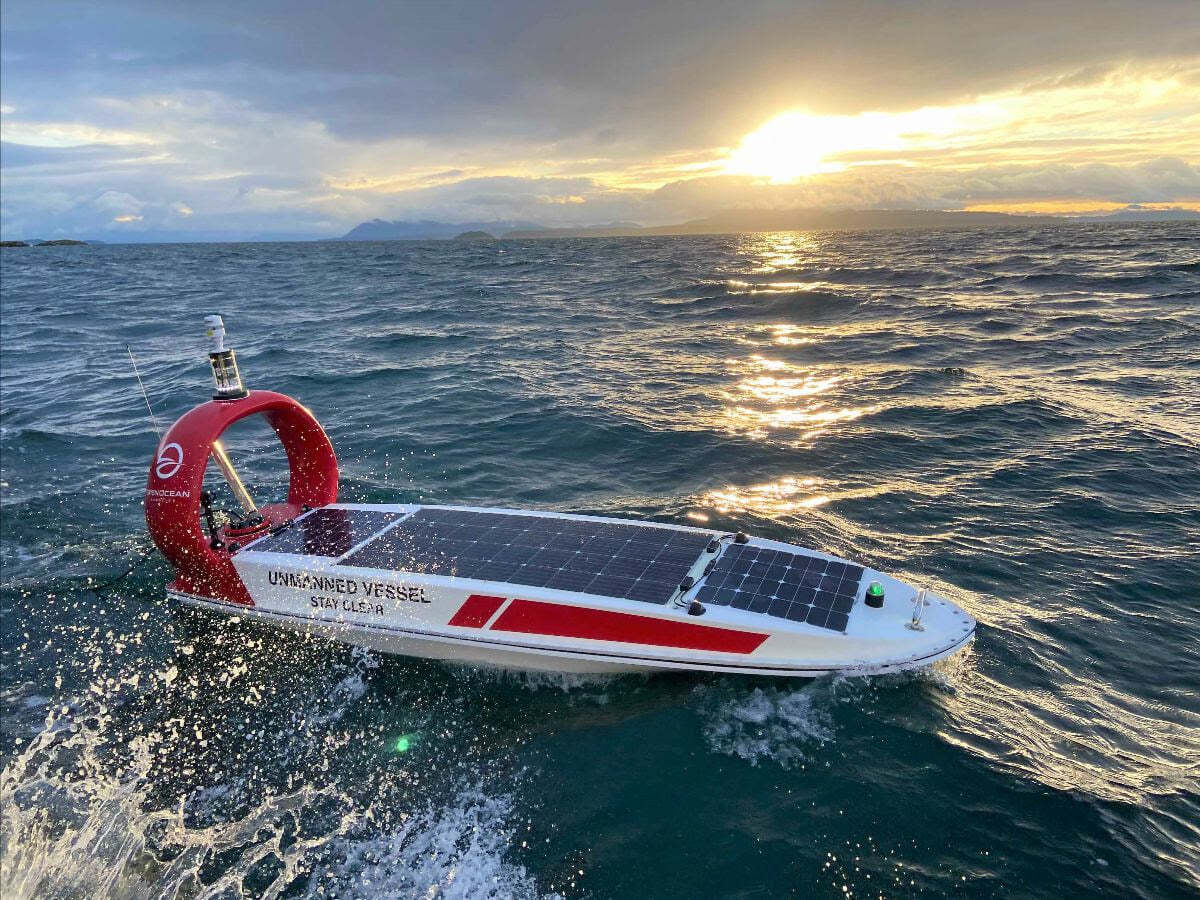 Open Ocean Robotics was also recently awarded a $230,000 grant for a five-month project, from the Department of National Defence through a program that funds proposals for “building a defence innovation ecosystem.” The vessels themselves are equipped with sensors to measure weather, waves, depth, and noise, and have a 360-degree camera to “monitor surface conditions and illegal activities,” according to the company’s website. The USVs can run for months at a time and turn themselves upright if they run into strong currents.

As CEO of the company, Angus spends more time taking care of the business than out on site, but recently travelled to the Middle East to oversee the deployment of one of their USVs contracted by the US Navy.

“We just completed an exercise in the Persian Gulf called ‘Digital Horizon,’ looking at advancing these uncrewed assets to…protect against things like trafficking, smuggling, illegal fishing, [and] to protect freedom of navigation for safe passage,” Angus said.

The vessels, she continued, have several advantages over the alternatives: they’re quiet, there’s no greenhouse gas emissions, and they’re scalable.

Recognition for this technology has extended past North America. Angus said she met with Prince William and Princess Kate in Boston earlier in December to talk about Open Ocean Robotics.

“We were selected by their charity, The Earthshot Foundation, as well as the UK consulate, as a company best representing one of their mandates to protect life underwater, so I had the opportunity to showcase our technology there,” she said.

To Angus, all the accolades signal an opportunity to keep growing. The company is about to move into a new facility which will give them space for a larger team and more manufacturing capabilities. They’re also looking into opening offices elsewhere.

“We can operate globally and we've already operated in a number of places around the world,” Angus said. “So that will likely be in the future plans as well.”

To learn more about Angus’s vision for the future of the ocean economy in Victoria, RSVP to the Insiders-only event here.