The Top Canadian Tech Hubs You Don't Know About

The Top Canadian Tech Hubs You Don't Know About

Victoria, BC, October 21, 2019: Toronto and Vancouver get the lion’s share of attention on the Canadian tech scene. And it’s no wonder! Startup founders, investment and innovation naturally cluster in the big cities. But the truth is that innovation is happening all across our country.

From Victoria to Kelowna, Halifax and a lot of places in between, tech hiring and investment are up.

We reached out to the experts at the Information and Communications Technology Council (ICTC), who helped us run the numbers on how some of the tech hubs are punching above their weight. From Montreal to Saskatoon, and our own nation’s capital, ecosystems across Canada are definitely in a growth phase.

Here, we can see how much these areas have been hiring tech professionals from 2014 to 2019 (for those who prefer bar graph visualizations, we’ve got that, too.)

Number employed in the tech sector for 2018 (companies under a tech industry code): 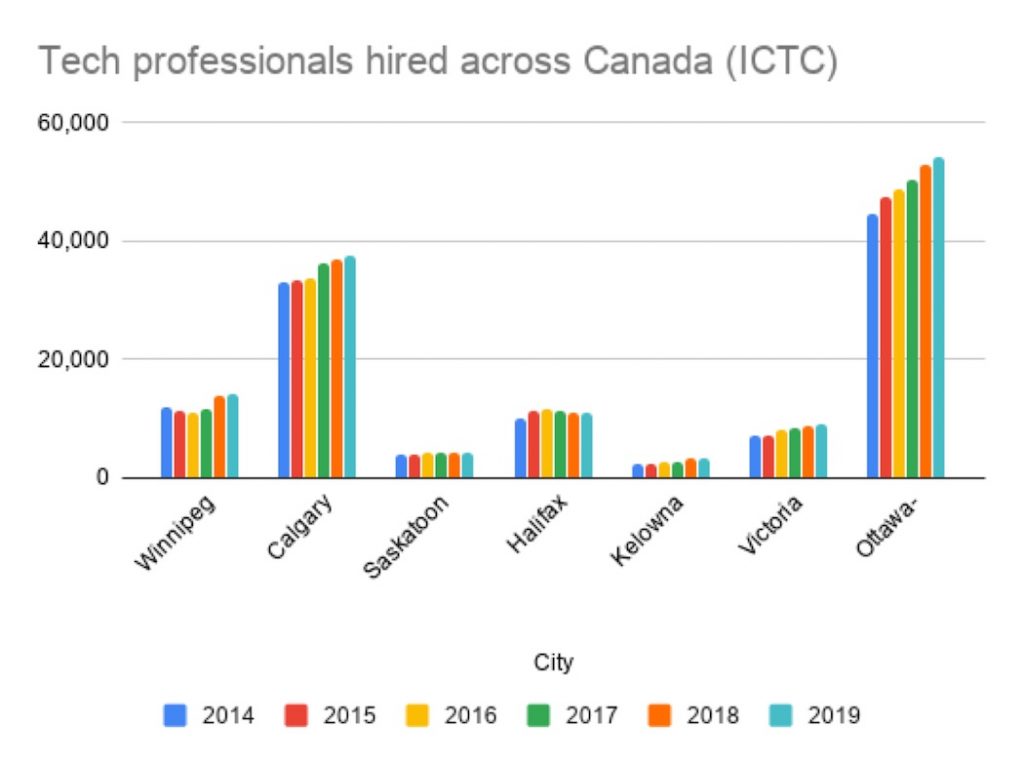 And all of these jobs translate into major economic activity on the ground. Let’s look at capital expenditures overall in some of these tech hubs:

Let’s delve a bit deeper into some of these top Canadian tech hubs you might not know about!

When the fisheries dwindled in Atlantic Canada, a lot of east coasters moved inland to Alberta to work in the oil and gas sector. That was the pipeline to jobs. Today, the coast if focused on tech-powered sustainable development. “In early 2018, the Government of Canada launched the Innovation Supercluster Initiative,” explains Alexandra Cutean, Senior Director of Research and Policy at ICTC. “Focused on creating strongholds of research, innovation, economic growth and job creation across Canada – essentially a “cluster” of this activity – this public-private undertaking is bound to make a splash in the Atlantic.”

The bounty of the sea fed Halifax’s workers in a different time, but clearly, tech is on the rise here.

Seeking a balanced lifestyle and an escape from the high cost of Vancouver, “real estate refugees” from the west coast are working with innovative folks from the Okanagan to create a growing tech hub here. Kelowna had 3,310 tech employees by 2019.

That’s an outstanding figure for a place that was known for agriculture and wineries up until about 5 minutes ago. A pleasant place for retirees to sit back on the porch is increasingly a place where millennials are moving in to take up tech jobs. Kelowna has the central hub for Okanogan Tech: Accelerate Okanogan – and their job board is the most complete in the region.

Some highlights cited by ICTC: Data Nerds, a real estate and property API provider, is expanding to the US. Anodyne Electronics Manufacturing Corp. (AEM), a manufacturer of aircraft communication systems is being acquired by Australian company Structural Monitoring Systems after many years of partnership. Hyper Hippo Games seems hungry-hungry for growth, too.

On a bright prairie day, the wind whips up waves and currents in fields of wheat that stretch to the horizon — but there’s a lot more to Saskatoon than grain and potash.

As ICTC notes, tax incentives and cheaper land prices are helping to boost growth in the tech sector. Saskatoon’s world-class technology park, Innovation Place, offers mentorship and affordable office space for technology companies. They’ve got over 1,500 people working in the park now and many of the companies are hiring tech talent. For instance, Tiny Eye, an image search app, recently won acceptance into a scale-up program to fast-track team growth.

The capital of BC used to be known almost exclusively as a government town. That’s changing. [VIATEC runs Victoria's] technology hub called Fort Tectoria, which is a coworking space that houses startups and hosts events. [VIATEC also facilitates a series of accelerator programs facilitating leadership and growth in the Victoria tech community].

That’s incredible growth! Meanwhile, the millennial population increased by 15 percent between 2009 and 2014. That’s faster than any tech market in Canada. And Amazon just opened up a large office there for its AWS Thinkbox services.

What’s spurring the rapid rise of this prairie tech hub? Generous tax credits for tech investing and R&D spending, to start. It has also encouraged partnerships between startups and government institutions, including labs and hospitals, to aid research. It’s a tech hub to watch!

Canadian tech hubs are hiring from abroad, too

Many tech professionals from abroad are entering these tech hubs via Global Talent Stream visas. We can at least provide the numbers to give you an idea of how VanHack helped put them there — in places you might not be thinking about (e.g., over 17 percent of our recruited international tech professionals went to… Winnipeg. Yes, Winnipeg).

Why are all of these tech hubs growing away from the big cities?

The big US companies like Amazon and Microsoft that are setting up branch offices in Canada have created a role-reversal. Since they’re sucking up a lot of the local tech talent, small towns that boast a balanced lifestyle and lower real estate costs are increasingly attractive to tech professionals from Canada or anywhere else in the world.

It’s also easier now, thanks to the Canadian government’s Global Talent Stream, to bring in talent from abroad to fill critical tech roles. That holds true for small towns as much as for big cities. It’s even an advantage for smaller centers, which offer a “great outdoors” experience that senior developers from abroad can prefer, to give their families a better quality of life.

The big story here? Innovation is everywhere. For those working in tech, you’ve got opportunities across Canada to pursue your dream.